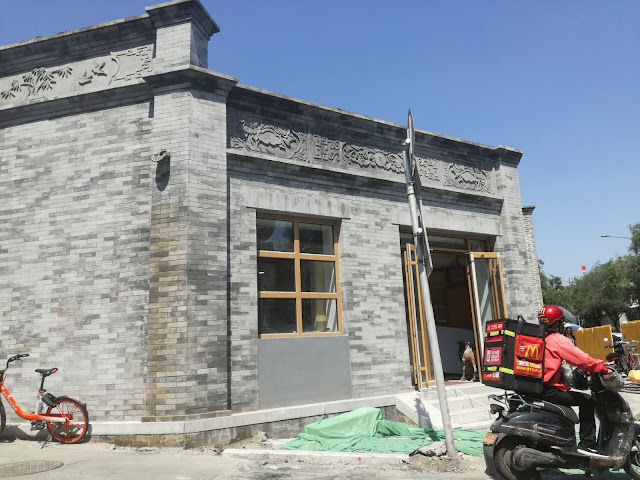 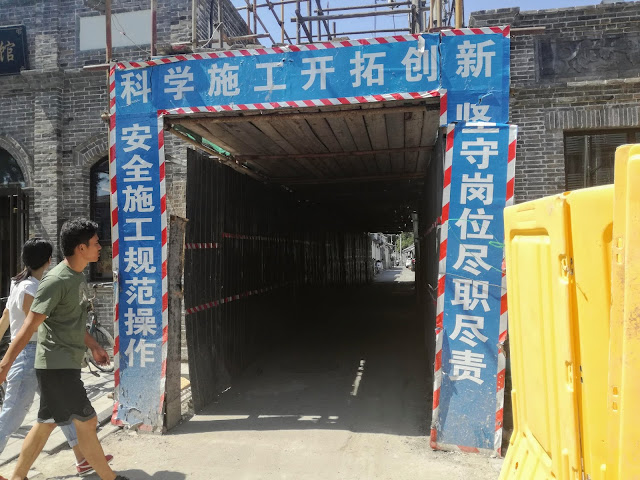 So much has been written about these Beijing neighborhoods. This is skimming the surface. I don't know the place well.

Where was this, even? Somewhere off of Andingmen Inner Street 安定门内大街, I'm guessing, but that general area, south of the Lama Temple, northwest of Beixinqiao Station. I remember visiting in June of last year, visiting the Lama Temple with *****, then going back in September to have breakfast with Nicky, watching the campaign to brick up all the businesses south of the temple. (Beijing trips run together, but I guess I've been there... about ten or eleven times in the past two years, including short stopovers. So, these dates are not confirmed). I remember reading some notes from people unhappy about the bricking up of shops on the streets around the Lama Temple. That must have been last summer. Visiting late last month, the entire area has been transformed—or, is in the very late stages of being transformed. Some of the shops around the Lama Temple entrance have hung on, but most are gone. Along the main roads, this is how things look: grey brick, torn up sidewalks, piles of building materials, green matting, construction fences. The sign above the corridor reads: "科学施工开拓创新 / 安全施工规范操作 / 坚守岗位尽职尽责," something like... "Pursue development and innovation scientifically / Hold to standardized operation to ensure safety / Maintain your post and do your duty."

If only I was nostalgic for the old Beijing, the new Beijing might disturb me more. I have nostalgia for and anger about other demolished towns but I have a hard time caring about Beijing. 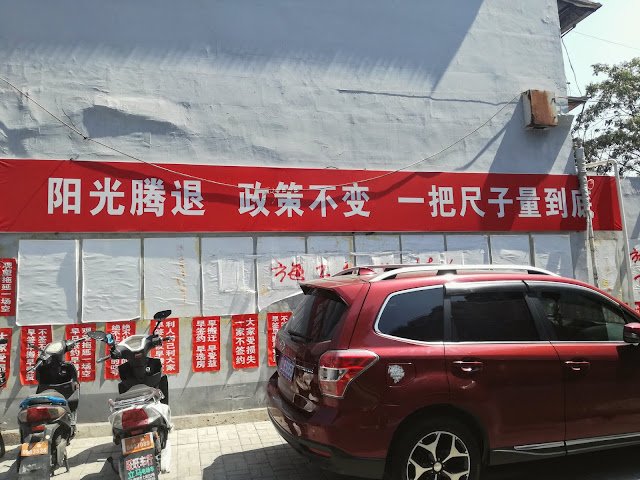 Deeper inside, there are still pockets of something else... It's not the old, the authentic, maybe, since most of these buildings seem to be fairly recent. It seems like you have to intentionally take a wrong turn to arrive at these places, as if the plan is already in place to direct visitors over to the shopping streets cutting through the blocks of hutong.

I wish I knew the history of the place better. I know next to nothing.

This sign says: "阳光腾退 政策不变 一把尺子量到底." I don't know the policies behind these specific directives, but I'll stumble forward, poking at the larger ideas: "sunshine relocation" 阳光腾退 yángguāngténgtuì, makes sense, a slogan suggesting transparency in the relocation process (腾退 téngtuì, rather than 拆迁 chāiqiān, is usually used for situations where the owner is requesting the relocation of tenants, and the building might not be demolished but simply redeveloped?), 政策不变 zhèngcèbùbiàn seems basic enough ("the policy will not change"), and then 一把尺子量到底 yībǎchǐziliàngdàodǐ, which I think I've seen used other places, talking about demolition compensation, suggesting that there a standard method for calculating compensation will be carried out. The smaller posters say things like "早签约 早选房 / 早搬迁 早受益 " "The sooner you sign the contract, the sooner you can choose a home / The sooner you move out, the sooner you benefit," "一家不签约, 大家受损失" "Everyone suffers, if one household refuses to sign," "早日签约早得利 观望拖延一场空" "The sooner you sign the better / Attempting to delay is futile." Maybe the blank white sheets pasted up were meant to have announcements pasted up on them about relocations, or the ink has simply been washed by rain. I don't know. Now, there is nothing but graffiti in red paint, advising that cars shouldn't be parked on the block (the graffiti is blocked in the image above by a parked car).

And here is Jia Li, writing in Artforum to update us on the closure of galleries and less clearly defined art spaces as part of the "urban planning campaign" launched in 2017, which I think most people outside of Beijing still associate with the Daxing fire and the eviction of the "low-end population" 低端人口:

Last summer, residences along a road in Caochangdi—the arts district architected in part by Ai Weiwei—were branded with an ominous “拆” (to be demolished). X Gallery and de Sarthe Gallery’s Beijing branch had to shutter with only two weeks’ notice. But even these expulsions seem trivial when compared to the tens of thousands of members of the “low-end population” who have lost their homes, jobs, and educational opportunities due to this draconian urban purge. It’s no secret the government is kicking out migrant workers, vendors, and low-wage laborers through the violent means of timed relocation, utilities cancelation, forced eviction, arrest, and detention. Statistics from the Municipal Beijing Bureau of Statistics show that, at the end of 2017, over 22,000 residents moved out of the city, resulting in the first instance of negative population growth since 1997. According to a Xinhua News Agency report, the campaign to demolish the city’s “illegal structures” had cleared out 5,985 hectares of land that very year.

So, this building in Jiaodaokou will disappear soon, to be replaced by—I'm not sure. The campaign to declutter the city and evict residents is part of a larger campaign, launched in 2015, aimed at decentralizing Beijing's non-capital functions, as part of a plan to develop an integrated Beijing-Tianjin-Hebei metropolitan area, 京津冀城市群 Jīng-Jīn-Jì chéngshìqún. Clear Beijing. Take down these old ramshackle structures in the central city and send their residents to live in convenient new metropolitan hubs. 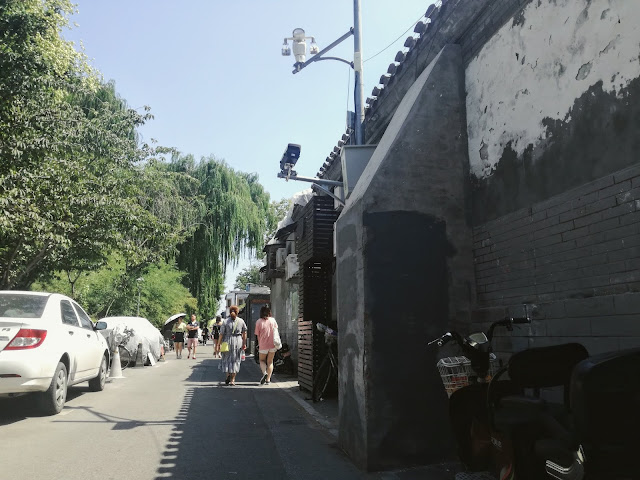 These entries are never particularly deep, and I've already said, Well, I don't know anything about the place and I don't really care. I never knew what was here before and I won't care. This corner of the new Beijing was made for me. I'm a visitor to the city. Let me cast my tourist gaze on 老北京. I'm only here because I exited the air-conditioned lobby of my hotel and wandered aimlessly northward, searching idly for a place to buy packable and representative Beijing gifts for friends in Tokyo. I feel at home with the tourists, who, like me, are taken in by the new Beijing. The city and this district have just enough authenticity for me to claim to have experienced Beijing realness. I dream about moving to the new Beijing, occupying a slick apartment in a new high-rise in a formerly gritty Jiaodaokou neighborhood, going over to Beiluoguxiang during the afternoon to sip coffee in some "hutong café" or calling a car with an app on my phone to take me over to the WeWork at Qianmen. Perhaps I could still sell a book about the transformation of the city, maybe put together a blog post where I collect images of security cameras or public toilets or painted over advertising graffiti.

I know somebody that still lives nearby in an authentic hutong hovel and let him take me around what's left of the old neighborhood, listen to his stories about stray cats, landlords, his glorious penury, and maybe he could take me to his favorite hutong bar and reminisce about the winter of 2011 when he and **** ******** met **** **** ******* at that place, the winter all the bottles of beer froze... I like the grey brick. I like the shops selling expensive gifts. And I go back into the air-conditioned lobby through the revolving doors. Maybe I'm giving myself too much credit that this is or could be the place for me, but someone like me that makes more money than I do.

It strikes me that authenticity isn't really the point here, almost thirty years after the invention of hutong tourism—I mean, almost like this is an attempt at reproducing the already pretty fake idea of the hutong presented in pre-Olympic hutong tours, renovation projects, etc. (hesitant to use the word "authentic," though, and hutong tourism is as authentic a culture as whatever, but you know what I mean), like a Xerox of a Xerox of a 老北京. I mean, maybe not even about 老北京, but an attempt to recapture Nanluoguxiang in 2008 rather than whatever the place actually looked like when it was true Beijing Realness, an attempt to do modernity and beauty with an authentic-ish backdrop, a more generic showcase project and not really a cultural tourism spot—or the point of the project is showcasing the cleanup, like, this is what we can achieve with a bulldozer and piles of grey bricks?