Konketsuji Rika《混血児リカ》Half-Breed Rika (1972) opens with Rika (Aoki Rika 青木リカ) delivering a child on a beach. The mother has been impregnated by a gangster. When she confronts the father, she and her gang are drawn into a fight that ends with the rape of her seven accomplices and Rika being dragged off in a police truck. As the women are stripped and brutalized in a warehouse, Rika sits impassively, and there is an abrupt cut to her own origin story: Rika's mother, chased down by GIs in a Jeep, pursued into a forest, and raped. MPs break it up, but it's too late.

This is an "unexceptional reading" because there are not many other ways to read it. Other sukeban films leave something to the imagination, or at least there is something to discuss—what's with all the S&M, for example? But here, it's all there. The opening of the film is almost frame-by-frame loyal to the manga of the same name, until the story of Rika's mother is introduced. Bonten Taro 凡天太郎, an artist and veteran of the Second World War, who became a cult icon for his trashy pulp output, lingers on the origin story, and there are even fewer ways to read this... 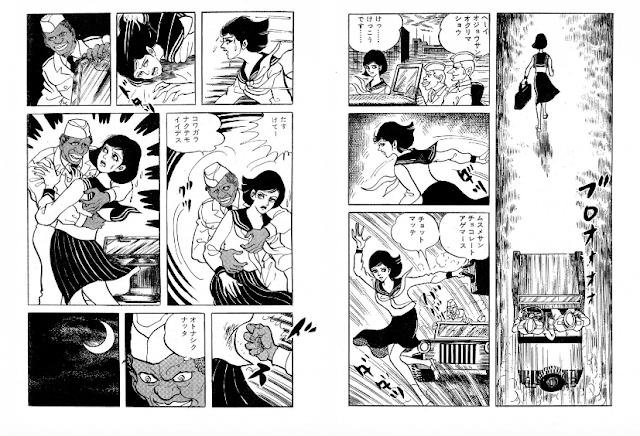 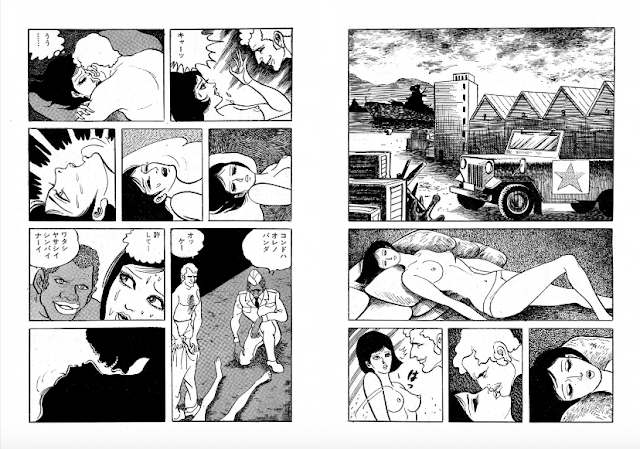 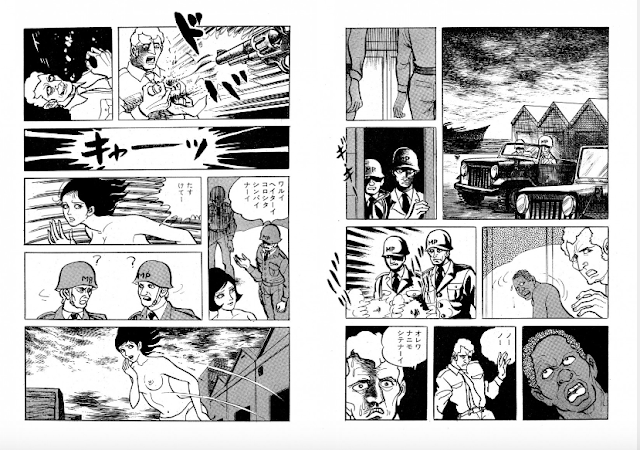 By 1946, there were tens of thousands of illegitimate American-Japanese children. Local courts had no jurisdiction over paternity suits and a child could only receive Japanese citizenship without a father's name on the birth certificate. "[A] former occupationaire stationed in Korea, informed Ebony's readers that he had encountered 'many Japanese girls [with] Negro children, filled with hopes of their GI fathers returning,' and 'was wondering what was happening to the babies not already murdered by their mothers.'" (This is from: Black Yanks in the Pacific: Race in the Making of American Military Empire After World War II, Michael Cullen Green [2010].) Sawada Miki, heiress and socialite, was riding on a train one day when a dead infant fell from a luggage rack above her. The baby was brown. She built an orphanage for illegitimate children. She said that the children must be protected because they were so clearly inferior to Japanese children. The occupying force and the Japanese could not agree on a solution. The Japanese said: Take these children with you. The Americans said: We don't want them. (See: Occupying Power: Sex Workers and Servicemen in Postwar Japan, Sarah Kovner, [2013].)

In September of 1955, an American soldier, Isaac J. Hurt, of Kadena Air Base, snatched a six-year-old Okinawan girl on her way home from school, raped her, then cut her up, and tossed her in a garbage dump. Okinawa was not under Japanese jurisdiction, so the laws of the country did not apply to him; he was court martialed, sentenced to death, then allowed to return to the United States. More than 300,000 people gathered for a protest at the Okinawa Peace Memorial Museum (Okinawa and the U.S. Military: Identity Making in the Age of Globalization, Masamichi S. Inoue [2007]). The story is only remembered because it was the breaking point. Life went on, though. When Bonten Taro's manga was serialized and even when this film was released, Okinawa was still under occupation.

The scene of Rika's mother looking through the fence at military housing, as a father plays with his child, is particularly striking. She gave birth to the child but planned to murder it, setting it in a shallow grave and covering it with dirt. Rika's grandmother intervenes, and the three women live together, until the death of the matriarch. Rika's mother turns to prostitution. She is one of the women that set off a moral panic in Japan at the time, one of those willing to endanger Japanese moral character and racial purity by becoming a military base sex worker. Rika looks on with anger and disgust.

A girl gangster cannot be a virgin. In Sukeban Blues: Queen Bee Strikes Back《女番長ブルース 牝蜂の逆襲》(1971), a new recruit has her nails filed by by Reiko 玲子 (Ike Reiko 池玲子), before she is sent into the bathroom to break her hymen. A single drop of blood blossoms in the toilet.

Rika's defloration is also what forces her into the criminal lifestyle. In the tenth rape in under fifteen minutes' runtime, Rika is attacked by her mother's boyfriend, left battered and naked on her bed, where she is found by her mother. Rika springs to her feet and rushes to the kitchen to grab a knife, and then she goes out for revenge.

After the early sequences of Rika's origin, things become stranger. Rika is sent to a reform school and squares off with a rival in a scene heavily influenced by Shaw Brothers films...

This is not really a sukeban 女番長 film, or, at least, for better or worse, it's more than just a girl boss flick. The director, Nakahira Ko, churned out films in the '50s and '60s, including odes to youth culture, like Crazed Fruit《狂った果実》(1956), Ozu-ish melodrama Seasons of Love《四季の愛欲》(1958), and Whirlpool of Flesh《砂の上の植物群》(1964), and made Half-Breed Rika after a stint with the Shaw Brothers in Hong Kong. The script is by Shindo Kaneto 新藤兼人, a respected director and screenwriter, who, like everyone in the industry at the time, seems to have switched freely between exploitation films and more personal projects. 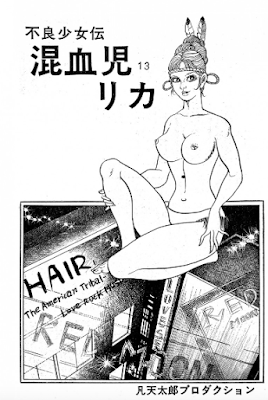 Aoki Rika benefits from being an unknown. She went on to complete a trilogy of increasingly bad Rika films, but then disappeared. I have never sat through the next two films in the series. But I have never seen her in anything else. She is Rika.

Unlike Ike Reiko or Sugimoto Miki 杉本美樹, Aoki does not carry herself like a boss. The tough girls of the sukeban films are closer to Russ Meyer actresses (in a way, I guess, and I mean, mostly physically, not really in their general demeanor or whatever, as I think I went into before...), or to the Rika of the manga, who is a typical Bonten Taro pulp manga girl, with nipples point at the ceiling and a bad attitude, just a mess of blonde hair to mark her racial difference...

She brings something special to the film. She is awkward. When Aoki takes the stage to dance at a bar to secure the release of a singer held hostage by the club's boss, she exudes no sex appeal or toughness. She is narrow-hipped and awkward. She is a gamine. She looks most authentic in moments like the early scene in the back of the truck, staring into space, seeming resigned to her fate. When she cuts off the arm of a man who has wronged her, it seems bizarre and improbable. The judo throws she executes liberating the extorted money from a mob boss look physically impossible. When she guns down a mob boss in the fall out from that extortion attempt, even splattered in blood, holding a pistol, she looks childish.