(communal feminism is in the eye of the beholder)

In pinky violence films enforced sex is frequently eroticised and female bodies are segmented and fetishised, either via bondage setups or filming techniques such as close-ups or low-angle shots. Cameras zoom in or pan over half-open mouths, breasts, napes, feet, women's faces writhing in pleasure (or pain during S/M-style tortures). Furthermore, many scenes suggest the characters are undressing, bathing or engaging in sexual activities oblivious to men who spy on them. Considering the above, these films substantiate Laura Mulvey's (1989) argument of the male scopophilic gaze as objectifying, fetishistic and voyeuristic. At the same time, however, pinky violence films also feature sequences in which heroines look back at their attackers with fiery, menacing gazes that terrify and act as preludes to revenge. They look into the camera, sometimes holding a blade or pointing a gun, not just as male characters, therefore, but also at complicit spectators. ... If the representation of female violent agency, resilience and will to overpower male antagonists does not obliterate the ... sexual objectification ... it certainly takes on (thanks to the hybridisation with horror and crime-action films) an unusual dimension and dynamism compared to the more stereotypical representations of celluloid heroines as enduring, sexually passive and meek. (This is from: "Sexing Up Post-War Japanese Cinema: Looking at the 1960s/1970s 'Pinky Violence' Films," by Laura Treglia in Pornographies: Critical Positions [2018])

And, well, I would argue, and not as expert, even the "counter-gaze" is meant to be erotic, as well, even if it signals a coming revenge plot. It seems to function much like the shot in gonzo porn, when the director requests the leading lady—and the plot, when there is one, usually suggests coercion, or at least hesitancy, and, yes, sometimes even anger—to look him in the eye, which is a request to stare directly into the lens of the camera and up at the viewer, the "complicit spectator." But the problem with applying this idea to these early-'70s films is: it is often the case that nobody is punished, and it is often the case that the woman being abused is not a heroic outlaw figure but simply a minor character. In the dozens plus rapes and suggested rapes that open Konketsuji Rika《混血児リカ》(1972), to take a film with no shortage of sexual violence, there are no fiery gazes and the only punishment meted out is to a man that attempts to pick up Rika in a bar shortly after she is raped by her mother's boyfriend... And in Terrifying Girls' High School: Women's Violent Classroom《恐怖女子高校 女暴力教室》(1972), rape is even employed as a tactic by the girls themselves, as when Michiko 迪子 (Sugimoto Miki 杉本美樹) directs her clique to bind their teacher, Yoshioka Keichi 吉岡敬一 (Naruse Masataka 成瀬正孝), and has his girlfriend raped in front of him.

The scene is all the more disturbing because we have an early scene of Michiko returning home to argue with her family which prompts her to retrace the moment that she thinks set her on a dark path to juvenile delinquency. She stands at a chainlink fence, reliving her own rape. Later she forces her teacher to stand in the same position. The rape of young Michiko is played against a soundtrack of shrieks and moans, there is a lingering upskirt as she struggles with her attackers, and we see her bra ripped off and her breasts fondled.

And in the same film, Sumiko 澄子 (Ema Ryoko 衣麻遼子), leader of the rival gang in the school, tortures a member of Michiko's gang by putting out cigarettes on her breasts. After Sumiko hangs up, the camera goes in for a closeup of her burnt flesh.

But so, taking another step back to where we started, and away from the detour into sexual violence, returning to the counter-gaze, and "radical representations of female sexuality" (that's how Martin Huisman puts it, in a paper on Meiko Kaji revenge films)... Let's pause here and turn to the examples that Laura Treglia cites on that same page: Ocho お蝶 (played by Ike Reiko 池玲子, who should appear further along in this piece, too) in Sex and Fury《不良姐御伝 猪の鹿お蝶 》(1973) in one of the most stunning scenes ever filmed, featuring a nude Ocho flinging a hanafuda into a man's eye before jumping out of the bath to cut down dozens of men in a snowy courtyard, and then Sasori in Female Prisoner Scorpion. These are rare examples and very different films than the Terrifying Girls' High School or Sukeban series...

And I flip to "Pinky Violence: Shock, Awe and the Exploitation of Sexual Liberation" by Alicia Kozma in the Journal of Japanese and Korean Cinema (2011), which gives a reading of the sukeban films that differs completely from my own and beginning with the history...

Western feminist-led organizations... led a series of efforts in Japan in the late 1940s in order to help Japanese women liberate (read: westernize) themselves by working to overcome what they considered to be the culturally bred tendencies that disabled them from fully participating in society and government (Garner 2004: 216). An allegiance formed between western feminists, the occupying Allied forces and politically astute Japanese feminists to advocate for the political and civil rights of Japanese women (Garner 2004: 215). As a result of these and other efforts, Japanese women were given the right to vote in 1947, and a new Constitution developed by the occupying Allied authorities included an equal rights clause and a revised Civil Code allowing women new spousal, property, education and equal-pay rights. Thus, by the late 1960s, when Pinky Violence films would make their first appearance, Japanese women were ostensibly living in a more equitable society, affording them more social and legal freedom than ever before.

Cinematically, New Wave Japanese film-makers like Hani, Imamura and Oshima were transforming Japanese cinema by incorporating revolutionary ideas into their work: social outcasts as protagonists, critiques of social structures, uninhibited sexuality and the changing roles of women (Mellen 1976: 419–26). Combined with the new role of film as an exploration of the post-war Japanese identity, a new type of Japanese cinematic realism emerged. The low-budget, non-studio films of the New Wave, and the growing role of exploitation film, provided fertile ground for new female characterizations in Japanese film, from more prominent roles in traditional yakuza films to the female gambler movies like the Hibotan bakuto/Red Peony Gambler series (1968–1972). These social, stylistic and aesthetic changes converged in the character of the sukeban.

Kozma argues that the girl gangs "exploit normative Japanese society to survive, in the process exposing hypocrisy and validating their outlaw status." I tend to see the outlaw world of Japan as aggressively normative, the flip-side of the topside world but intimately connected to it (this is even more true in Japan than it is in, say, the United States, since organized crime groups were—and are still—frequently deployed to mete out extrajudicial justice, or for tasks like breaking strikes or intimidating rivals). The sukebanare usually presented as subordinates of larger organized crime enterprises, led by men, and the action is often directed by those men; the underworld power of sukeban is often drawn from their connection to yakuza groups, as is the case in "What is conspicuously missing from their group structure," Kozma writes, "is a rigid power dynamic, instead replaced with a type of communal feminism fostered by equal participation in all activities, democratic decision-making and a protective nature." The lack of a rigid power dynamic is undercut by the themes of devotion to the charismatic sukeban leader, rituals to seal membership, the clear divisions between groups, and the fact that the gangs are often ordered into life-or-death battles. By the loosest definition, there might be some form of communal feminism, I guess... but they still fucking torture each other. I'm thinking of a scene in Sukeban: Escape from Reform School《女番長 感化院脱走》(1973), where Matsumoto Mina 松本三奈 (Sunaga Katsuyo 須永かつ代), while Aoki Ruriko 青木るり子 (Sugimoto) is preparing to set a fire in the reform school, says, to another girl's concerns, "Let 'em die, we're getting out of here."

The idea of these films as "spaces of social and sexual transgression" or a "subversive cinematic expressions of Japanese gender" seems problematic.

In order to find this nudity sexually exciting, the viewer would be forced to implicate themselves as the torturers and rapists of the characters they have come to identify as their heroes, severing their primary character identification. Based on the films’ refusal to create other characters that could engender identification, desuturing the viewer from the female hero would leave the audience in an unmoored viewing position. As such, transferring identification to allow for sexual titillation is unlikely. Therefore, male-on-female violence further solidifies the audience’s connection with the female characters through sympathy.

Also, much of the sexual violence seems to be presented as punishment or corrective. Kozma calls the sexual assaults "abnormal violence," but they are never presented as such, and, in fact, become so normal that viewers might not notice they've just watched dozens of rapes in an hour runtime. When rape is "punished" by violence, it is often at the direction of patriarchal figures, like in Zero Woman: Red Handcuffs, where a gang of criminals is tracked down because they are unlucky enough to have raped and kidnapped the daughter of a powerful politician.

The sexual and gender politics of the pulp film world is more traditional and conservative than it is subversive or transgressive. Rape is what turns Michiko bad, after all, and it's what turns Rika bad, too, etc. They become bad girls because they are raped and the honorable path is cut off, rather than becoming bad girls to seek revenge for their rape. The women in the film can be raped freely because they have become something other than wife or virgin. The women can freely sacrifice their bodies (as they do in numerous blackmail schemes) because they no longer have any value.

(And we can go back to the previous discussion of the supposedly anti-authoritarian riot at the end of the Lynch Law Classroom, which I also think defies the easy reading, or Sexjacking...) 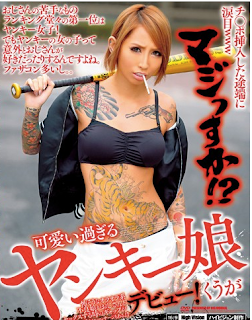 I think there is something to looking at contemporary echoes of the sukeban genre, and not Sukeban Deka, or the kitschy parodies, like Bloodbath at Pinky High《女子高生暴力教室 牝蜂の復讐》(2012) but something like the Cute Yankii Debut 可愛い過ぎるヤンキー娘デビュー series, which are the purest distillation of what's going on with the sex in sukeban movies: bad girls are punished for their transgressions, often at the hands of men representing outlaw figures like bikers or criminals, or they exploit symbols of polite society, giving freely of their bodies, which can no longer be transferred to the ownership of a husband, because their virginity has been compromised. Ijima Kuga 飯島くうが, posing on the cover of a DVD with a tiger across her belly, is an outlaw, and she is cool, but very few of the viewers are identifying with her (or they are, but for less complicated reasons)...

Or even the scene in Sukeban Blues: Queen Bee Strikes Back《女番長ブルース 牝蜂の逆襲》(1971), where Jun ジュン (Kagawa Yukie 賀川雪絵) seals her devotion to Reiko 玲子 (Ike Reiko) by sucking blood from a cut in her arm.

Most of these moments involve Ike Reiko.

Sugimoto Miki has a face that is beautiful in suffering, as in her chained sadistic torture in Girl Boss Revenge or her Noriko of the Cross electric shock scene in Lynch Law Classroom, but Ike Reiko is the best at expressing a pure, orgasmic bliss. You can go watch Modern Porno Tale: Inherited Sex Mania 《現代ポルノ伝 先天性淫婦 》(1971), which falls outside of this sukeban-focused review, but features Ike Reiko bringing herself to orgasm, and then joining French actress Sandra Julien for a shower, but there is also her leafy sex scene in Sukeban Blues: Queen Bee's Challenge《女番長ブルース 牝蜂の挑戦 》(1974) or as Yuki in the final scene of Women's Violent Classroom, seducing the administrator, before revealing the chrysanthemum tattoo on her inner thigh.